At the end of each college course we normally have an end of course dinner, and at one which was held at a high class restaurant, I chose Sea Bass which I had never tasted before, and as I looked at it on the plate, quite frankly it could have been any fish, and I thought in my usual mischievous way that it was probably a simple herring, suitably disguised, to earn them more money. Even though I immediately put such slanderous thoughts out of my mind, I just had to write a nonsense poem about a simple herring which overcame all odds

I'm just a simple herring, trying to stay alive.
Those night-time eyes are staring, as deeper down I dive.
Carelessly I lost my shoal, trying to catch a sprat,
but I couldn't eat it whole, that sprat was just too fat.


Now alone in the ocean deep, I'm hiding in the sand,
and dimly see the creatures creep, with clutching claw and hand.
Suddenly beside me here, a monstrous shark sinks down,
Yawning, as his pilots near, prepare his settling down.


Then all at once they spot me, nudging him for a snack.
His massive eyes so beadily, could give a heart attack.
The pilot fish they agitate, quite angry with the shark,
wanting him to seal my fate, my futures looking stark.


But he thinks I'm one of them, as I'm licking at his skin.
Smiling he says, "Oh what a gem, now try and do my fin."
The pilots shrug their shoulders, and give up in disgust.
I'm getting even bolder, and enjoy each fishy crust. 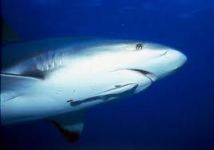 This herring who thought all was lost but survived reminds me of all my fraternity of Laryngectomees.