Using poetic licence, I am a German Pilot on a reconnaissance flight across the intended invasion point of England to the north of Dover. It is shortly after Dunkirk, and my victorious army waiting in France, the army that had already conquered eight European countries, to be unleashed, knowing that the British army was already a defeated foe, and could not defend their shore. I had been chosen because I knew the English, having been educated in that country below me, and secretly I had a healthy respect for them.

As I turned north above St Margarets hills, I was astounded to see row after row of warriors, all in different uniforms, and in complete shock I realised that all were ghosts defending their island. In fear I returned to France, and wrote this report. 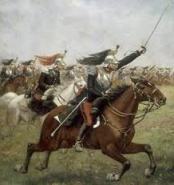 Fear struck at my heart, as I saw them there,
from cliff-tops edge and away inland,
ready to take part in the battle's share,
ready to defend their England.


I saw Arthur there, with Excalibur bright,
and Drake with the famous drum.
Alfred with axe, that was black as night
feeling sharpness, with his thumb.


Richard with his cross of red,
his knights behind him stand.
Cromwell with his roundheads led,
carried a bible in his hand.


Gordon with his Malacca cane,
Nelson with his sword, does lift.
Tars risen from the Spanish Main,
Redcoats from the old Rorke's Drift.


Lancers, Dragoons, six hundred,
straight from the valley of death.
Their enemies heart they plundered,
as they'd gasped their very last breath.


Rodney, Anson, Rhodes and Pitt,
Cornwallis, Livingstone and Bligh,
from Valhalla's hall, where they sit,
to stop us, they will try.


Flinders, Petrie, Byron and Penn,
Boscowen, Beattie and Haig.
Oh such a group of the bravest men,
as their country they try to save.


Clive and Wolff, Franklin and Scott,
Hereward and Robin Hood,
Defoe and Bunyan, Oh! Such a lot,
that shaped their England good.


I've flown my plane, back over to France,
our army waiting there.
Though I have seen, at a glance,
that this battle will not be fair.


Germany's mighty army,
and to win their fervent wish,
but I have seen the spirit of,
those fighting, ghostly English.