THE SCORPIONS OF THE DESERT

Such fearsome creatures, that lay in wait,
to kill the unwary, to seal their fate.
Beneath some rock, in those arid lands,
waiting and watching those desert sands. 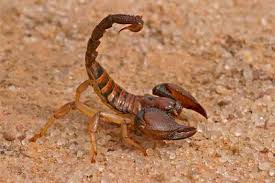 They have no fear in the shade so still,
their only object is that to kill,
with their venomous tail to stab if they can,
any animal, or a careless man.


Their tail arched over, above their head,
Ready to strike and make you dead.
It takes an hour for a man to die,
poor camels, so much longer lie.


But the thing they fear, is a soldier from Britain,
who for a hundred years many were bitten.
Petrol is poured in a circle around,
the flames drove them mad the soldiers found.


They sting their own neck in a moment of madness.
Death is instant to the soldiers gladness.
That desert alas, is two thousand miles wide,
With plenty of places for those scorpions to hide.