Professor Michael Kirton, BSC. MB. RCS, plain Mike to his friends and colleagues, peered again into the microscope with a sudden intake of breath. He could not believe his eyes; he had actually done it after all these years. He turned with a surge of elation to let them all know, but his colleagues had been gone for some time. After five years, on this particular project, of trying to find a cure for the scourge of cancer, his regular four assistants had long since stopped working late into the evening and night.

There had been many areas of study and investigation carried out in the laboratory, and although he had controlled all those lines of enquiry, it was his own more recent enquiry that had been successful. This was the culmination of all those years of hard work, when medical research had been his obsession, to the exclusion of everything else, marriage, a family life, children, and he thought in a fleeting moment that it would be marvellous to share this with somebody really close.

He paused for a moment, thinking of that evening years ago, when his life had changed completely. That beautiful young girl he had fallen in love with, and her crestfallen look when he had gently told her that he had to break off their relationship, as he could no longer concentrate on his work, and medical research was his life.

As a young medical student, grieving at the side of his dying father, he had felt so helpless, and had made a solemn promise to himself, to try and find a cure for cancer.

He must get this formula written down as quickly as possible. He started writing, frequently looking into his microscope, thinking that this probably the most important moment in his life, and he couldn't wait to tell his colleagues in the morning.

He suddenly realised that the light was on in the adjoining staff room, and on opening the door saw young Dr Aylsham asleep, sitting at the table, with his head resting on his folded arms. In front of him was a blank sheet of paper and a biro pen. He had gone in there to write his resignation but had obviously fallen asleep.

The young doctor had joined the team only two months previously, and Mike had not been terribly impressed with him. He still acted like a medical student and seemed more interested in having a good time than learning about medical research. In many ways the young man had made him think of himself at that age, but maturity had come quickly with quite awesome responsibilities.

Today had been a day off for the young man, as he had requested, in order to attend a friend's birthday party, but during the evening, he had turned up with several of his medical student friends, and they were nearly all silly with drink and acting like children. Mike had sent them all away, with the exception of young Dr Aylsham, whom he had taken into the staff room, and read the riot act to him. He had told him that he was no longer acceptable on the team, and should write his resignation before Mike sacked him. The young doctor had obviously fallen asleep in his drunken stupor before he could put pen to paper. Mike shook his head ruefully, thinking, "He won't even remember I told him to resign." The young doctor frequently had annoyed him, but he had always tried to be fair in dealing with him.

Mike shut the door of the staff room, ignoring him, and paced the floor, just bursting to tell somebody of this wonderful achievement. He glanced out of the window which was on the first floor of the University Research Block, and looked across the narrow roadway to the building opposite, which housed the rooms of the teachers, the professors, researchers and dons. His own room was in darkness, but his neighbours had a light on, and he could visualise the History Don, sitting in his deep armchair, reading from one of his many books that adorned his walls.

Mike made up his mind. He must tell somebody, so clutching the valuable formula, he went out onto the landing, shutting the door behind him, and ran down the stairs, through the arched entrance to run across the road, his thoughts racing with excitement.

The car driver didn't stand a chance, and the History Don walked to his window when he heard the ambulance bell ringing below, and on looking down saw some poor devil being stretchered into it.

Mike regained his senses in the back of the ambulance, which was stationary, with a medic just getting out of the back door. He got up and felt fine and followed the medic, wondering what had happened, and saw him talking to a policeman and a car driver. They were standing near a car which was up on the pavement, having swerved into the wall. Mike walked towards them to tell them that he at least was alright, when he heard the medic say, "I'm afraid we've lost him." Mike wondered who they were talking about, and as he glanced round to look for who-ever had been injured, the policeman and medic walked back towards the ambulance, and it was with horror when he realised that the policeman had walked straight through him. 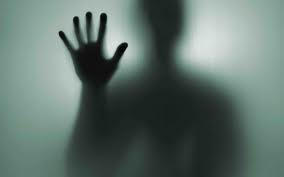 He put his hand out against the wall to steady himself, his mind reeling but he couldn't feel the wall, and his hand slowly sank into the brickwork. He followed them and looked into the back of the ambulance, and saw the ambulance medic explaining to the policeman the injuries that he had suffered in the apparent accident. He gazed in horror at his own lifeless figure laying there, drained of all life and deathly white.

Panic gripped him, and he went to a few onlookers, still in their night attire, who were standing there, trying to convince them that he was alive and well, but they could neither see nor hear what he was saying. Several other policemen pushed the car from the pavement, and he saw one policeman's boot, whilst crunching on broken glass, push a piece of paper down the drain, and realised that the formulae he had written was lost for ever.

He began to tremble with fear as to what would happen next, when an elderly man stepped from the few people there and looked directly at him. He walked towards Mike smiling and extended his arms in welcome. He said, "Don't be afraid Michael, you're in good hands. I'm sorry that I am late in greeting you, but both you and the car were travelling too fast." He held Mike's hand in a grip that could be felt, and seeing Mike's surprise, the elderly man said, "We are on a different astral plane than anybody else Michael and it is better you ignore them."

Mike, relieved that he was not quite alone and able to converse with somebody said, "Is it true, am I really dead." The man smiled gently and replied, "Your time has expired in the earthly form, and you will soon be experiencing a new existence, one that is full of love, is perfect, and what you would call heavenly."

Mike, thinking of the events just prior to the accident, said, "I had worked for years to find a cure for cancer and at the moment of my success life is taken from me. Now nobody will know of it, what an absolute waste." The elderly man looking sympathetic, put is arm on Michael's shoulder, saying, "I am so sorry, but you must compose yourself for the journey that we are about to make together."

Mike glanced up at the windows of the laboratory, and asked if he could visit it for the last time and the guide took his hand and they literally floated up the stairway, through the doorway into the laboratory, where Mike has spent most of his working life. He gazed fondly at all those familiar things, before passing through into the staff room, closely followed by the elderly man.

Doctor Aylsham was still asleep at the table, and Michael said, "If only I could wake him and get him to write down that formula, but that is not possible I suppose." The elderly man smiled nodding his agreement. Mike suddenly saw a mist appear to rise from the young doctor's body and just hover there. He pointed and asked what it was, and the elderly man said smilingly, "It's nothing Michael, he's dreaming, his spirit has left his body, but don't worry he can't see us." Suddenly his voice changed, and he said in a note of urgency, "Quick Michael, you haven't got much time, while his spirit is out of his body, put your hand in his and write your formula on that piece of paper." Mike did as he was told and wrote his formula, and was surprised it was not in his hand-writing, whilst the elderly man said, "Quickly get your hand out, his spirit is descending, and I haven't seen you do this."

Before they left, Mike stroked the young doctor's hair, thinking to himself, "What fate brought you back to the laboratory tonight. Without you young man, my life's work would have all been in vain, I owe you so much."

The following morning Peter Aylshem awoke and was amazed at where he found himself. The last thing he could remember was leaving a party and 'going on somewhere.' He had a wash and put a white coat on, and as he was making coffee he heard his colleagues arriving. He was surprised to see the two girls crying, and stunned to hear that the boss had been killed in a road accident outside sometime during the night. He told them that he must have been asleep when it happened. They all naturally assumed that he had gone into work after his party to help Mike, and Mike had sent him to rest in the staff room at some stage.

They suddenly found the precious formula in Peter's handwriting, and all of them knowing Mike's methods of dictating complicated formulae assumed naturally he had done just that, and Peter had written it. Peter was puzzled, but had to assume they were right. Two of them decided to follow the formula, a thing normally done in every test several times, and were astonished at the result. They congratulated Peter on being with Mike when it had been done during the night and it was discovered that it was a genuine cure.

Soon the laboratory was filled with important people, all showering congratulations upon them, and Peter Aylsham in particular, who kept insisting he had nothing to do with it, and all thanks must be due to Mike. They all thought he was being very modest, and that included the Television and Press people, who were clamouring to carry out interviews.

One of the girls came to Peter, and said it was yet another telephone call, but this time from his mother. She told him that she had been watching the excitement on television, and she was so proud of him, and he told her that he really had nothing to do with it, but they wouldn't believe him, and that it was all down to his boss Mike, and that he had been a wonderful man. She replied, "Yes, I know" He asked if she had ever met him, and she thought of that night many years ago, when Mike had told her that their relationship must end, and that was the last time she saw him. That was the very night she was going to tell him that she was expecting his baby, but never told him. Her later husband accepted her small son, and Peter had never been told that he had a different father.