BAREFOOT IN THE RAIN

Leaving the station at 2-30.am in pouring rain, together with another P.C. both of us on our way to our respective beats after our 30 minute break, we were on the point of going our various ways when we saw a seven year old boy running towards the police station. It had been raining heavily all night, but was torrential at that particular time.

I stopped the boy who appeared exhausted with running in fear, and realised he had nothing on his feet, and he was wearing pyjamas. He was saturated with the downpour. I quickly took off my police cape and wrapped it around him, trying to calm him down, and asked him what was wrong. 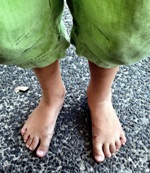 He told me where he lived, in a tenement flat near a street market over half a mile away. He had been woken by the sound of his mother screaming and sounds of fighting. Going out of his bedroom he had seen two men with knives had broken in and were trying to steal things. His father had been knocked down, and couldn't get up, so he had run out of the street door to get help from the police station.

I told my colleague to carry him quickly back to the station, and I set off running as fast as I could the half mile to his address.

I arrived there fairly quickly, completely out of breath, with my heart pounding at a great rate, and soaked in that cold rain right through to the skin.

The ground floor flat was in complete darkness, and I thought the worst had happened to the boys parents, but relief and puzzlement when a gas lamp was lit inside, and they both appeared in night attire at the door. I asked if they were alright which astonished them, and then I told them about their seven year old son who had stopped me over half a mile away and told me what had been happening. They looked at each other in horror, and saying, "He's ill in bed with the flu." They rushed into his bedroom to find he was missing

It was only then that I realised that the boy had been suffering from such a high temperature during the night, that he had become delirious, and imagined everything. Help arrived from the station, and we took the parents back with us. The police doctor had been called and the young lad was taken by ambulance to hospital to ensure his safety.

It was about a month later, I was on traffic duty, when on walking back to the kerb mum brought the young lad to me to thank me for looking after him on that night. I told him that illness can make anybody imagine things, but in spite of all that his instinct of running to police was perfect, on trying to help and protect his parents, and I considered him a brave young man.

That brought a smile.