I DELIVER A BABY

It was gone midnight a few days before Christmas in 1952, and it was an extremely busy night, with I think every PC involved with something, and after bringing in two prisoners from my beat for attempted shop breaking, and they were dealt with, the Station Sergeant asked me to help out with the numerous prisoners filling our cells, before resuming my beat patrol. It wasnt long before he told me to take the Duty Inspectors car, a Hillman Minx, to 88 Grosvenor Terrace, Camberwell, where he said there had been a call for police.

I asked what the call was about, as I quickly booked the car out, but he said he didnt know, which I thought unusual. So I drove there quickly, not knowing what to expect. It was snowing, with a fair covering on the streets. On turning into Grosvenor Terrace, outside the house I could see a young man who was completely agitated. Before I could say a word to him, he said, Quick officer, upstairs running into the house and up the stairs,

I followed him quickly fully expecting a murder, manslaughter or suicide, but on entering his bedroom I saw his young wife in bed in an advanced stage of pregnancy moaning pitiably with the pains, which were coming almost continuously.

I then realised what was expected of me, and to say I was scared would be to put it mildly. The young wife saw this man in uniform, saying, Thank God youre here. her face smiling in relief. I knew nothing about childbirth, and although married with my one child, I had always closed my ears when Tilly was discussing such things with a female friend or relation, and in those days husbands were never present at the birth, and although there had been a documentary film made just recently, most men had declined going to see it, including me, because men apparently were passing out in the cinema.

So I was in a very strange situation, and I dare not let the mother-to-be see my inward panic. Realising that the baby was due in a matter of minutes, I got the young husband to bring in a bowl of hot water and towels, and because he was on the verge of fainting and could be of no possible help, I sent him into the kitchen out of the way. The bedroom was bitterly cold with no heating of any sort, so I made a tent of the bedclothes over the mums legs, talking to the young lady the whole time, as if I did this every day, purely to give her confidence. I was racking my memory, for any snippet of information, which I had so carefully tried to discard when Tilly was talking, and thank god I did remember some things.

The baby, a little girl with a mop of black hair appeared, and holding the back of her head gently I helped her into this world, talking to mum the whole time, and then with a flannel wiped the blood and mucus from around the nose, mouth and eyes, and the babe started breathing, and the eyes opened. Still under the tent, I cleaned the babe completely, wrapping her in a sheet, I had put in the bed to get warm, but I didnt know how to cut the cord.

I remembered that I had to get the after-birth away. I put a newspaper in position before squeezing the stomach down-wards, and put it under the bed. The baby cried and the young husband peered around the door, and I told him that he had a daughter.

He then told me that he had first telephoned St Thomas's Hospital for a midwife and an ambulance to be sent, but it would be some time before they could send a midwife, but in the meanwhile they telephoned my station asking that an officer be sent to keep a watching brief. That crafty Sergeant!

Luckily within minutes I heard the ambulance arrive, and the midwife came in, and after I had explained what I had done, she showed me how to cut the cord at both ends. She said I had done well, but mum and baby were taken into hospital because the room was so cold. 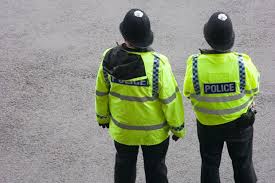 The young father made me a cup of tea in the kitchen, and said that it was wonderful that policemen were so trained, but when I told him that we received no training for pregnant mums or childbirth, he promptly fainted.

I was invited to the Christening a few months later, but declined their kind offer, as we were all so terribly young, and doing things like that was alright in the heat of the moment, but to become friends I felt could cause embarrassment, but they named the babe after me, LEONORA, poor little devil. She was 7lbs 6oz.

When the babe was about 9 months old, asleep in her pram outside, I was walking to my beat with another PC, who was on an adjoining beat, when we stopped and peered in at her asleep. I said to him quite proudly, Shes one of mine.

It was a Sunday morning and two elderly ladies passing, carrying bibles on their way to church, apparently heard me and looked horrified.