The Royal Humane Society is a charity that grants awards for acts of bravery in the saving of human life and, also, for the restoration of life by resuscitation. The Society was founded in London in 1774 by two doctors, William Hawes (1736-1808) and Thomas Cogan (1736-1818).

They were concerned at the number of people wrongly taken for dead - and, in some cases, buried alive. Both men wanted to promote the new, but controversial, medical technique of resuscitation and offered money to anyone rescuing someone from the brink of death.

They both invited 15 friends and the first meeting was held on 18 April 1774 at the Chapter Coffee House, St Paul's Churchyard. The founder members of the Society - all of them men - felt sure that the public would support them in their aim of restoring 'a father to the fatherless, a husband to the widow, and a living child to the bosom of its mournful parents'

It was the winter of 1956, and at 6-45am I was just finishing my duty as driver of the 999 car 6L for Lucy, and had actually just booked off in the front office, my wireless operator and plain clothes observer had already handed over to the daytime crew, and I knew my own relief would be with us within minutes. It had been a very busy night, with numerous radio calls, from burglars on premises, to pub fights, to a stolen car chase, and quite frankly I was ready for my bed.

There was no sign of my relief, when the daytime operator ran in to tell me that we had another call to premises about three miles away, where the body of a young woman had been found in the kitchen by her parents. Without booking on again, I raced out and took 6L for Lucy at a very high speed on the bell for those three miles, getting there within minutes.

Apparently the only daughter aged 19, had been to a dance the previous evening, and on reaching home, had gone into the rear scullery to make herself a cup of tea, her parents already asleep upstairs in their bedroom. She turned the gas tap on, but before she could light it she felt dizzy, and collapsed on the floor, the matchbox still in her hand.

Although she had hit the stone floor quite hard, luckily her face was quite close to the bottom of a badly fitting external door, and although the room quickly filled with poisonous coal gas, the bitterly cold wintry weather blew under that door, and her lungs were getting some gas which kept her unconscious all night, but fresh cold night air somehow kept her alive.

Her parents had awoken with the strong smell of gas pervading the house, and racing downstairs, found their daughter in the scullery, stiff and cold, not breathing, and they were convinced that she was dead.

I sent them into the front room out of the way, whilst I turned off the gas and opened the door, and did artificial respiration, the Holger Neilson method, whilst my two colleagues massaged her stiff and frozen limbs. There was absolutely no sign of life, as we looked at each other, each praying silently that this young girl would live.

I kept up the massage of the lungs and heart, for much longer than I should have done, something like twenty minutes, when suddenly I felt her body shudder beneath me. We had done it! I said to my crew, "She's breathing". We kept going, until at last she was breathing normally and she eventually opened her eyes and looked at me. I cannot describe the feeling amongst my crew at that moment, but as I stood up feeling very shaky, and walked very unsteady into the front room to tell her parents that she was alive, and that I was unable to carry her up to her bedroom. Her father soon did that, as I thought her mother would crush me with her thanks. I called an ambulance with that life saving oxygen, and she was taken into hospital for a thorough examination.

The upshot of this was that the newspapers got hold of the story, and the parents insisted that I be awarded something or the other. I found it quite embarrassing when at a full council meeting I was awarded a Parchment on Vellum, issued by The Royal Humane Society. 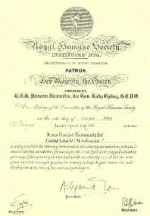 I have always found it jokingly useful, when saying I am now a humanist, which I think is something quite different.