Len at the start of the 2nd World War was a schoolboy, the youngest of seven children, and couldnt wait to join his three brothers and three sisters who had joined the armed forces.

By the age of twelve he had lost three homes by bombing and fire storms, and in one was trapped deep underground unable to move, for four hours until dug-out and rescued.

All schooling had stopped owing to destroyed schools, so by being a big lad he went to a Royal Artillery Anti-Aircraft Regiment, told them he was 15 and was accepted into their cadet company, and after training went out with one of the big mobile guns at night into the streets of London, firing at the swarms of enemy aircraft overhead. He was the signals runner for the crew.

He then became a Corporal Cadet Guide leading parties of servicemen between main line stations in London, when raids were in progress, as all surface transport had stopped. He then joined an Infantry Cadet company as a sergeant, and assisted the Bofors gun crews on the cliffs at Ramsgate, firing the Vickers twin machine guns at overhead enemy planes.

He joined the army at 17 and was posted to Egypt, Palestine and the Sudan as a Military Policeman. As Rudyard Kipling wrote of India, so, Len writes of his time in those desert lands.

He was involved in the first Israeli War in 1948. On returning to England three years later, he joined the London police becoming a class 1 driver answering emergency calls, and was then transferred to the C.I.D at Scotland Yard where he served with the famous 'Flying Squad' known to Londoners as the 'Sweeney.

He has seven commendations from the police, one for arresting two men, one of whom was armed and had fired at him twice. He also has an award from The Royal Humane Society for saving life, and if pressed will talk of two babies he delivered, one in a snowstorm.

On leaving the police he became the Group Security Manager for the 'International Stores' then the largest retail company in the U.K. Upon retirement he started his own company selling car parts to the motor industry, until at the age of 74, he went down with cancer of the throat, and after a series of operations, the cancer was removed, but he lost his vocal cords in the process.

His only method of communication was by writing, so to improve those skills he went back to Adult Education classes at college. 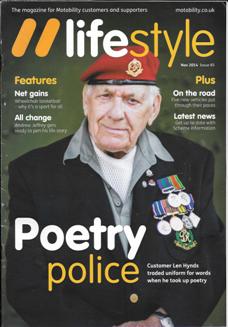 Ten years previously, he had a major heart operation, when his Aortic Heart Valve, was exchanged for an American Metallic One, and a pacemaker, and a by-pass were done at the same time. It was whilst at College that it was discovered that a tiny piece of skin (The Pharynx) was still capable of vibrating in the Trachea, so further operations followed, and a valve inserted. Len who now breathed through a hole in the neck, where the adams apple used to be, was taught how to block that hole with the thumb, diverting exhaled air through the valve past the pharynx, and up into the mouth once again. The sound emerged as a trembling noise. He then had to learn to convert that sound once again into human speech.

He was then advised to go on to University, which he did, and three years later graduated in Creative Writing, Poetry and Writing for Stage And Screen.

He may not be able to show any emotion in his artificial speech, but that is more than compensated for in his writing.

"It's mother natures way of compensation," he says.

Len since 2009 has had a quarterly column with Web Whispers of America, a Largynectomee Support Group which via the internet has thousands of readers throughout the world

He aslo has had poems and some stories published by the IAL (America) International Association of Laryngectomees.

Len also writes poetry for "Talking Back" a New South Wales, Australian group of ten support clubs of Laryngectomees and has many poems resting in the archives of the Australian IWVPA (International Ware Veterans Poetry Archives) which can be reached via IWVPA

Some of Len's work has been published both in print and on-line. To see a list of Len's published works click here